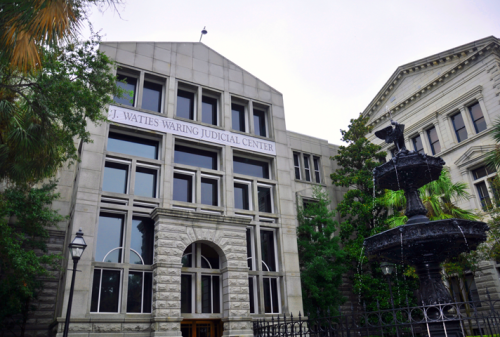 Lydon was born Cheryl Darlene Allen on Myrtle Beach Air Force Base in 1962.  She received a B.A. from Clemson College in 1983 and a J.D. from the University of South Carolina Law School in 1987.  Upon graduation, Lydon was hired by the Columbia firm of Nexsen, Pruet, Jacobs & Pollard as an Associate.[1]

In 2005, Lydon reopened her own law practice in Columbia, where she stayed until she was appointed as U.S. Attorney for the District of South Carolina in 2018.

The seat Lydon has been nominated for opened on September 4, 2018, with Judge A. Marvin Quattlebaum’s elevation to the U.S. Court of Appeals for the Fourth Circuit.  In June 2019, Lydon was contacted by Sen. Tim Scott to gauge her interest in a federal judgeship.[3]  After Lydon confirmed her interest, she was recommended by Scott and Sen. Lindsay Graham to the White House.

Lydon has primarily spent her career in criminal law, alternating between working as a prosecutor and a criminal defense attorney.  Over the course of her career, Lydon has tried approximately fifteen cases to verdict.

Lydon’s time as a prosecutor is obviously capped by her current position as U.S. Attorney, a position she got over the frontrunner possibly due to his more liberal position on cannabis.[4]  However, even before she became U.S. Attorney, Lydon made a name for herself as a prosecutor on Operation Lost Trust, a corruption probe.[5]  Lydon also prosecuted Earle Morris, the former Lieutenant Governor of South Carolina, for violations of state securities laws.[6]

As an experienced prosecutor with extensive experience on the defense side as well, Lydon would be well-prepared to handle the criminal side of being a federal judge.  While senators may question the extent of her civil experience, Lydon would likely overcome that hurdle on the way to a comfortable confirmation.