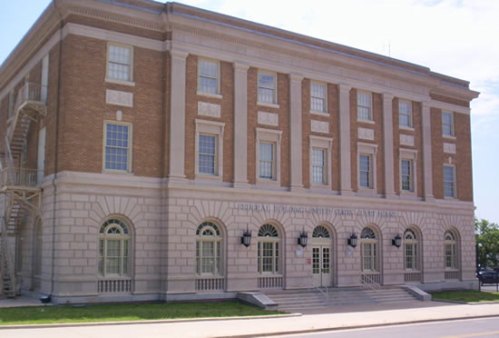 The Federal Courthouse in Lawton, Oklahoma

Like Judge David Nye, Scott L. Palk has been waiting a long time for a federal judicial appointment: over two years to be exact.  Luckily, it looks like 2017 may be the year that Palk finally gets to don the black robes.

An Oklahoma native, Scott Lawrence Palk was born in Tulsa in 1967.  After getting a B.S. from Oklahoma State University and a J.D. from the University of Oklahoma School of Law, Palk joined the District Attorney’s office in Cleveland County.  In 2002, Palk moved to the U.S. Attorney’s Office for the Western District of Oklahoma, serving as an Assistant U.S. Attorney in the Criminal Division.  In 2004, Palk rose to be Deputy Chief of the Criminal Division.

In 2011, Palk left the U.S. Attorney’s Office to rejoin his alma mater, the University of Oklahoma School of Law, as an Assistant Dean of Students and Assistant General Counsel.

On May 18, 2015, Palk was contacted by the office of Sen. James Lankford (R-OK), asking about his interest in an appointment to the Western District of Oklahoma.  After meetings with the Oklahoma Senators, and the Obama Administration, Palk was formally nominated on December 16, 2015.[1]  Palk, and fellow nominee Judge Suzanne Mitchell, received Committee hearings on April 21, 2016,[2] and were approved out of committee unanimously.[3]  However, they ran into a roadblock on judicial confirmations set up by Senate Majority Leader Mitch McConnell (R-KY).  As such, Palk’s nomination was never confirmed and returned to the White House at the end of the 114th Congress.

However, both Lankford and Sen. James Inhofe (R-OK) indicated their continued support for Palk’s nomination.  By their recommendation, Palk was renominated by the Trump Administration on May 8, 2017.[4]

The seat Palk has been nominated for opened on December 1, 2014, with Judge Stephen P. Friot’s move to senior status.  Despite three of the seven judgeships on the Western District of Oklahoma being vacant, no judges were confirmed to this court during the Obama Administration.  Instead, the Administration’s nominees, Palk and Mitchell, were left unconfirmed despite unanimous committee approval and the support of Oklahoma’s Republican Senators.

Palk has spent most of his career as a state and federal prosecutor (ten years as the former, nine as the latter).  As an assistant D.A. in Norman, Palk prosecuted violent crimes, drug crimes, sex crimes, and crimes against children.  Among his more notable cases, Palk successfully prosecuted Larry Gene Goble of Noble for the shooting deaths of two people.[5]

In one of his most significant cases, Palk prosecuted Frank Duane Welch for the 1987 murder of Jo Talley Cooper.[6]  In his defense, Welch argued that Cooper died while the two were engaged in auto-erotic asphyxiation.[7]  To combat Welch’s defense, Palk and the prosecution team admitted evidence of another murder Welch had committed, that of Debra Stevens.[8]  After Welch was convicted and sentenced to death, he challenged his trial on several bases, including the admission of the Stevens murder.[9]  The Oklahoma Court of Criminal Appeals affirmed the sentence and the conviction, but criticized Palk and the other prosecutors for failing to delineate the Burks exception that would admit the Stevens conviction when filing their notice with the court.[10]  After the Supreme Court denied review of his case,[11] Welch was executed in 2007.[12]

As an AUSA, Palk successfully prosecuted Sean Michael Gillespie, a white supremacist who was convicted of throwing a Molotov cocktail into a Jewish temple.[13]  Palk was also part of the appellate team that successfully defended Gillespie’s conviction.

As a Dean at the University of Oklahoma Law School, Palk handles civil and administrative matters for the school, including the recruitment of students, supervision of staff, and the mediation of employment issues.

Palk is a registered Republican, but his only political contribution of record is a $250 contribution to Tully McCoy, a Democratic Congressional candidate in 1994.[14]  However, at the time of his candidacy, McCoy was the District Attorney for Cleveland County (and Palk’s boss).  As such, Palk’s contribution can merely be viewed as support for his boss, rather than an endorsement of the Democratic party.

As his nominations by President Obama and President Trump would suggest, Palk is not a controversial candidate.  There is little in his record that will incite opposition on either the left or the right.  While Palk’s criminal experience is one-sided (he has spent most of his legal career as a prosecutor), this is hardly disqualifying.  Approximately one year ago, the Judiciary Committee approved Palk’s nomination unanimously.  It will likely do so again.  However, this time, Palk will likely get a floor vote as well.

[10] Id. at ❡9 (“However, we take this opportunity to remind trial judges and prosecutors of the importance of delineating the exception and purpose for which other crimes evidence is being offered.”).